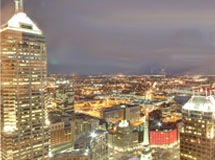 The state’s second largest city after Indianapolis, Fort Wayne, was first established as a series of army forts in 1794, being led by Revolutionary War statesman Anthony Wayne. Being named in Wayne’s honor, the settlement quickly developed as a trading post for pioneers. The village Fort Wayne was platted in 1823 and later became a booming manufacturing town known as the “Rust Belt” industrial town.

Now the economy of Fort Wayne is based on distribution, healthcare, transportation, and logistics. However, the city is mostly considered the cultural hub of northeastern Indiana due to its numerous art galleries and museums. Being closely located to the Ohio border, the city and its nearby area are also the home of many wholesale and retail precious metal dealers of the state which shall continue to grow now that bullion has been exempted from the sales tax.