21 hours ago
Inflation Slowed in July, But Will it Continue along a Downward Trajectory?
23 hours ago
BITCOIN, SILVER AND GOLD PRICES, DAILY MARKET NEWS. August 2022.
1 week ago
Zimbabwe Sells Out of New Gold Coins Introduced to Curb Inflation
2 weeks ago
Vehicle Repossessions Climb as US Households Struggle with Finances
2 weeks ago
BITCOIN, SILVER AND GOLD PRICE, DAILY MARKET NEWS. July 2022.

The commodity complex continues to struggle on the heels of intensifying trade wars between the world’s two largest economies. The United States and China. On Tuesday President Trump released a list of Chinese goods valued at $200B that may be subject to a new 10% tariff. This follows the $50B in tariffs announced in June and the subsequent $34B in retaliatory tariffs announced by China. While the new list includes many manufactured products such as water boilers and airplane tires. It also includes a number of raw commodities, including cotton, steel, aluminum, and agricultural products such as orange juice.

The result of the tariff announcements continues to be distinct selling not only across the specific materials mentioned above but further across the entire commodity spectrum. For the week (7/9/2018 – 7/13/2018), the commodity complex finished lower by 2.2%.

Certain hedge funds and exchange-traded funds which are designed to invest across the broad commodity space must maintain weighted allocations to the entire sector. When the value of one commodity falls, these funds must then sell their other unrelated commodities to keep their stated fund allocations in proper alignment.

The US / Chinese trade wars are thus taking a toll not only on the specific products listed above but the entire commodity sector, including precious metals.

We generally measure the commodity complex via the CRB Index, which includes an average of 19 raw materials including the energy, metals, and the agricultural spectrum. Below we see that the recent selling across the sector has resulted in a violation of the short-term rising trend which began in July 2017 (turquoise color): 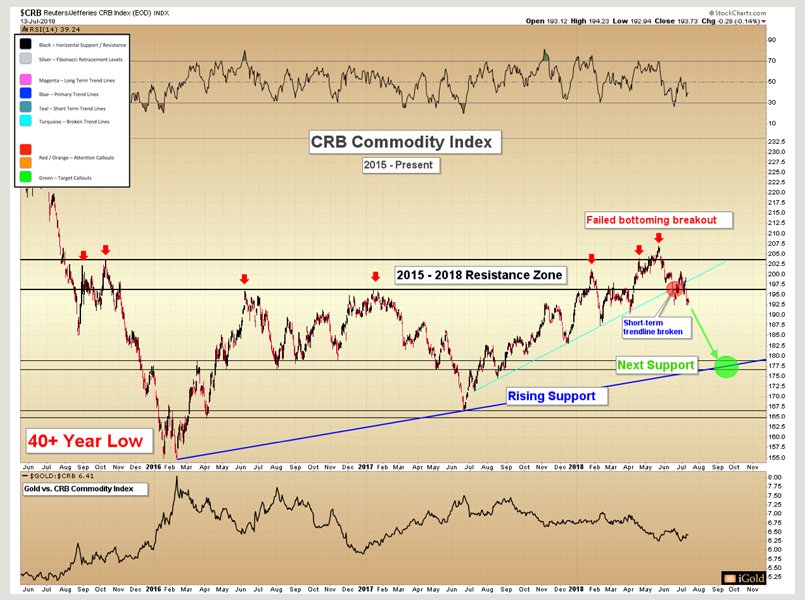 The result is a failed bottom breakout of the commodity space. Hedge fund and index fund selling following the US / Chinese tariff wars have caused the commodity complex to fail to eclipse its 2015 – 2018 resistance zone (above, black) on a sustained basis.

A failed breakout of a bottoming attempt does not mean the sector must collapse. The most significant decline in commodities occurred from 2014 – 2016.  Oil fell by 70%, soybeans fell by 40%, and gold fell by 35%. Now at 40+ year lows, the majority of the decline is behind us.

Still, a failed bottom breakout can mean that the sector must consolidate under the recent range (2015 – 2018 resistance zone, black) for months or years further. Closing this week at 193 on the CRB index, the commodities find themselves without significant support until the 176 – 178 zone (green) labeled above is tested. This will represent approximately an 8% further decline expected over the coming months.

Over the past week, gold fell by just over 1.0% to close at $1,241. Meanwhile, the CRB commodity index fell by nearly 2.2%. We can see thus that gold held up better than most commodities. However, there is a delay effect with respect to index fund selling, as most funds rebalance their holdings monthly or quarterly, not daily. If such rebalancing were to cause gold to fall the 8% that we expect most commodities will over the next several months, such would represent a $100 decline from present levels, targeting $1,140.

We can see how US and Chinese trade wars are causing direct selling in the commodity sector. It will, in turn, cause weakness in precious metals — unrelated to any specific gold or silver negative fundamentals.

Takeaway on Commodities and Tariffs

As a final point, we wish to remind readers that although commodities and metals may suffer over the short run, the entire complex is still just two years removed from 40+ year lows. It is unlikely that significant further price declines await from such multi-decade lows. However, what may indeed happen is that the bottoming process extends beyond a simple 3-year affair. The sector shrinks capacity in response to low prices, in turn lowering supply. Lower supply will, of course, eventually result in higher prices – it is simply a question of timing.

Christopher Aaron has been trading in the commodity and financial markets since the early 2000s. He began his career as an intelligence analyst for the Central Intelligence Agency.

Christopher Aaron specializes in the creation and interpretation of pattern-of-life mapping in Afghanistan and Iraq. His strategy of blending behavioral and technical analysis has helped him and his clients to identify both long-term market cycles and short-term opportunities for profit.